Established in 1977, LAV brings together around 50,000 people (members and contributors) and has 66 local chapters.

Promoting and bringing about a cultural change in the way we relate to other animals, with a view to achieving a lifestyle and making political choices based on respect for and solidarity towards all living beings, irrespective of their species. Putting a stop to any form of exploitation and suffering by asserting animals' rights and promoting the issuing and implementation of new laws.

Ours is a 41-year-long story of commitment and struggles: years of results for animal rights achieved through our efforts and the support of those who have believed in us. Thanks to these struggles we were able, so far, to have a total of 13 national laws and EU directives approved.

The first laws on stray animals and wildlife protection were passed in the early 1990s; law no. 413/93: the first law in the world to allow conscientious objection against vivisection for university students and researchers. The 2000s brought along the ban on imports and trade of cat and dog furs, which would then extend across Europe; law no. 189/2004, upgraded crimes against animals from pecuniary offences to felonies introducing, for the first time, incarceration as a punishment for animal abuse, killing or exploitation in fights; a ban on imports of seal skins and other products; a ban on force feeding of ducks and geese for the production of foie gras, and the prohibition to sell lobsters and other crustaceans by putting them on display on ice live with their claws tied together.

A new traffic code provision, introducing the principle according to which animals, as well as humans, have the right to be rescued in case of road accident; a law making companion animal trafficking a criminal offence; a reform of apartment buildings regulations that prohibits the no-pet rule; a new law on vivisection (26/2014) which prohibits the keeping of animals for vivisection purposes, puts a stop to the use of great apes and the use of animals in military and teaching tests and confirms the ban on tests on stray animals.

Every year, thanks to its legal team, LAV initiates about 500 legal actions to assert animal rights, which culminate in important court rulings. The first exemplary judgement sentencing a man to imprisonment (3 years and 8 months) for cruelty to animals was obtained in Turin in 2006, with more than 70 animals seized and released into the custody of the Association; the conviction of a slaughtering company and that of an animal transporter who reportedly carried to the slaughterhouse cows not healthy enough to walk; the first conviction in Italy for sexual violence on animals: the former owner of a breeding kennel in the province of Bolzano was sentenced to two years of imprisonment; the historic conviction in first degree of the co-manager, manager and veterinary of Green Hill, the Brescia breeding kennel for dogs destined to vivisection labs.

Every year we engage in a growing number of activities to advocate for animal rights, thanks to the hard work of our activists and to the commitment of our supporters and contributors. In 2016 we will be at the forefront of our ongoing campaign #LAVeraLibertà (true freedom), against the confinement and exhibition of animals in dolphinariums, zoos, circuses and travelling shows. Many other campaigns, e.g., "Cambiamenu" ("Change Menu") and "Animal-Free" are conducted with the aim to kick off a change in people's eating and clothing habits, to support and establish rescue centres for animals that have a history of abuse and neglect, as well as, of course, to promote the adoption or sponsorship of the animals in the custody of LAV, to support alternative methods of scientific research, and last but not least, to foster initiatives aimed at peaceful and fair cohabitation with wildlife.

LAV is a member of the Eurogroup for Animals, the European Coalition to End Animal Experiments, the Fur Free Alliance and ENDCAPtivity. 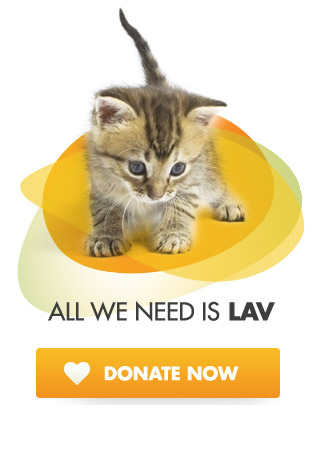